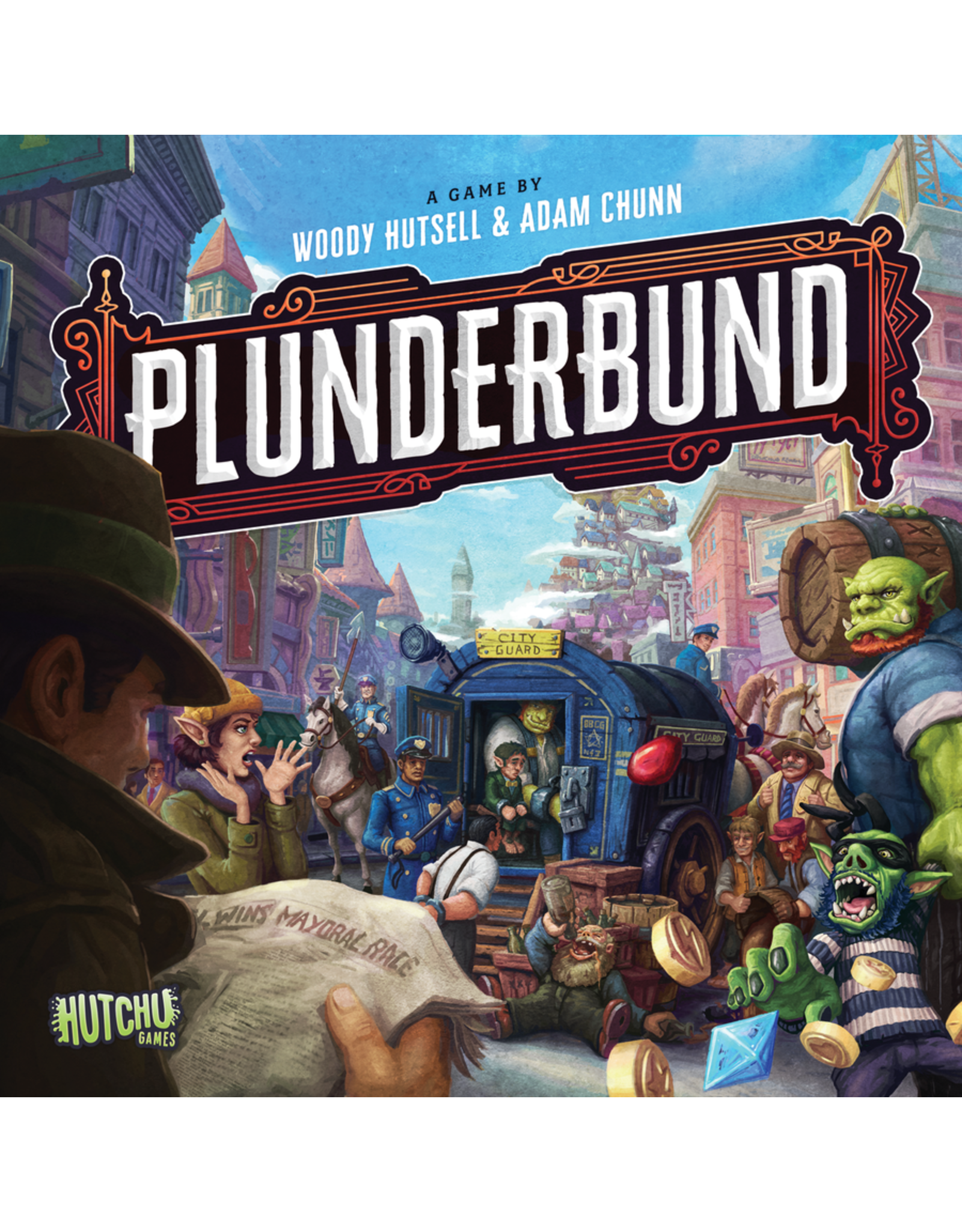 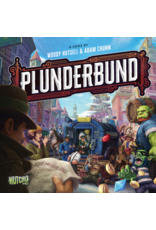 You lead a guild striving to dominate the market for illegal goods in the Sprawl, a city rich in history and lawlessness. Recruit and task an army of agents, racketeers, spymasters and others to build your reputation by selling your goods and causing chaos for your rivals. Through a light deck building mechanism you attempt to create the strongest network of agents, racketeers and the most desirable black market goods. Winners and losers are determined by a fun, yet sophisticated, supply & demand mechanic.

Plunderbund combines the innate corruption and profiteering of prohibition Chicago and the lawlessness of the fantasy setting, the Sprawl.

It's an era before cell phones, e-commerce and customer relationship management tools, an honest guild had to get business the hard way: thieving, sorcery, money laundering and bribery.

Plunderbund is your chance to lead your guild to fame, fortune or disaster as you navigate the whims of the notoriously picky Sprawl consumer and deal with underhanded tactics from rivals determined to steal your business.

Each player will lead a guild with the power to decide where your finite resources are invested. A light deck building mechanic enables you to acquire and improve your black market goods, add agents, add racketeers, disrupt your rivals’ operations or just wreak havoc. Cards are added to your deck through a simple snake draft from a limited selection of over twenty different recruits.

Your guild gains reputation (VPs) as a sophisticated yet simply implemented supply and demand mechanic helps you sell your black market goods to merchants. At the end of the game you will be compared to your rivals on the strength of your network of agents, number of racketeers and black market goods qualities. All this growth comes at a cost, you have to take favors as you try to build your operation without the benefit of any gold in your coffers. As they say “paybacks are hell”. Fail to payback your favors and you pay the price as you see your reputation diminished at the end of the game.

Over the course of twelve months, divided into four seasons, you will build your reputation on the backs of your guild recruits and their abilities.

All seasons have three months. Each month players:
1) Place demand coins
2) Draw cards and payback favors
3) Determine cards to put into play and pay for them
4) Calculate and receive goods

After three months have been played:
1) Compete for demand
2) Recruit guild member using a limited snake draft
3) Start the next season

After the end of the fourth season, the game is over and final reputation is tallied.

There are two key concepts in Plunderbund. The first is the supply and demand mechanism. The game starts with the placement of demand at open merchants. The demand generated is correlated with the products being offered by the guilds. In the early game, demand is mostly based on the appeal and ingenuity of the products. Later, as with any market, quality and price become more important. Each demand coin expresses a customer’s preference. Some customers want the best appeal, some want the best ingenuity, some want the best quality, and some want the lowest price.

Your goal is to win more demand coins than other guilds by having the best network of rogues and the best product. The rogues are your sales team. The more rogues you have in place, the more deals you can win and the more your guild reputation soars. Over the course of the game you will build out your ability to compete for demand.

To win a merchant’s demand coin, you must have an “Agent” on that merchant. If you have the only agent on a merchant, you are nearly certain to win. If another guild’s agent is on that merchant, then you must compete. The winner is the player who is leading in that product attribute. So, if the customer has expressed an interest in high quality then the guild with the best quality has a chance to win.

You can only win a demand coin if you can supply a good. Goods are earned (stolen, fenced, you name it) at the end of each month. The number of goods you generate each month is based on your investment in your supply chain (which lowers price) and quality. For each competition you win, you decide whether you want to take that specific demand coin or pass. If you pass, the demand coin either stays on the board or is won by a rival guild. Suffice it to say, you need goods to have a chance win Plunderbund.

The second key concept is the favor economy. Instead of paying money to get things done for your guild, you take favors. These favors are used to put your guild members to work (each card has a favor cost ranging from zero to four). These favor cards go in your discard pile. Fortunately, paying back a favor is easy. As soon as you draw the favor card into your play area, from your draw pile, it is immediately considered payed back. In this way, favors are an opportunity cost. If you end the game with favors that are not paid back, they are deducted from your end of game score. Favor management is an essential part of Plunderbund.

If you understand these key concepts, then you are ready to build your guild reputation and win Plunderbund.